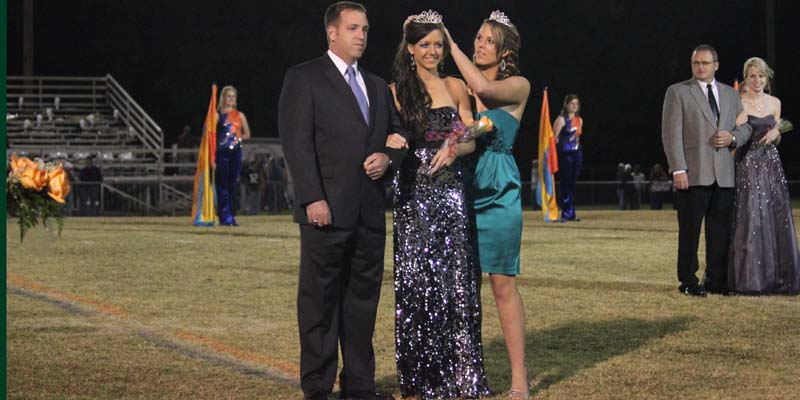 The winner of Homecoming Queen 2012 was senior Megan Draper.   This announcement was made during  the halftime show of the homecoming game, Friday, Oct. 19.
Draper was accompanied by her parents, Beth and Patrick Draper.  Her two sisters, senior Amanda Draper and junior Erin Draper, Junior, were also at the game to cheer her on.
Draper, who has attended Montevallo schools her entire academic career, enjoys participating in athletics.  She is a member of the volleyball and softball team.
“She’s a real team player,” senior volleyball teammate Sarah Hyde said.  “She’s always up for a challenge.”
Draper is a senior class representative in SGA. She is also a member of the National Honor Society, serving as their secretary.
“I’ve known Megan for several years now, and she works hard to balance her academics and extra-curricular activities,” Mass Communications sponsor Jennifer Turner said.  “She has found success in athletics and in the classroom, and I was pleased to see her classmates honor her with the title of Homecoming Queen.”
“I was really surprised to be chosen,” said Draper, “but also very happy to be honored to represent my school.”
Draper’s plans for after high school include attending the University of Alabama, and majoring in nursing.  She then plans to attend UAB to earn her doctorate degree.