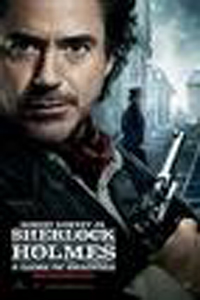 Sherlock Holmes, the notorious English detective, has been resurrected in the recent movie series starring Robert Downey, Jr.  Sherlock Holmes: A Game of Shadows, is the sequel to the first movie, originally released in 2009.
Hollywood has captured the adored stories of Holmes and Watson and turned them into an action packed, light- hearted adventurous comedy.  Downey plays a mentally abstract character that uses witty dialogue to present a crazed sleuth who is more dedicated to getting blown up than to solving the crime.  Jude Law stars in the assistant spotlight by bringing the character of Watson into play.  This duo embarks on an adventure which takes them through multiple locations, and any possible scenario to solve the mystery.
Oxford Professor Moriarty is the main antagonist and is continuously plotting new crimes for Holmes to solve.  Sherlock’s main distraction is the alluring Irene Alder.  She provides a spunky teaser for Holmes, and attempts to distract him from his real motive of stopping Moriarty.  The fist-fighting, grueling tag team that is displayed by Watson and Holmes takes itself to the next level through this sequel, and many critics rate it much higher than the first.
Downey, Law, and others do an extraordinary job of presenting the heroic side of the legends of Sherlock Holmes.  These two award winning actors have pushed the Holmes legacy further and further in to the realm of myth.  However, it serves its purpose as a quick, witty and fun piece of work and has obviously been enjoyed by audiences everywhere.  The movie has been a universal success and has brought Guy Richie and his crew over $524 million dollars.  After its release, A Game of Shadows remained on the top of box office charts for a few weeks.  I would recommend this movie to anyone who enjoys mysteries or comedies, or just a great escapist, entertaining movie.