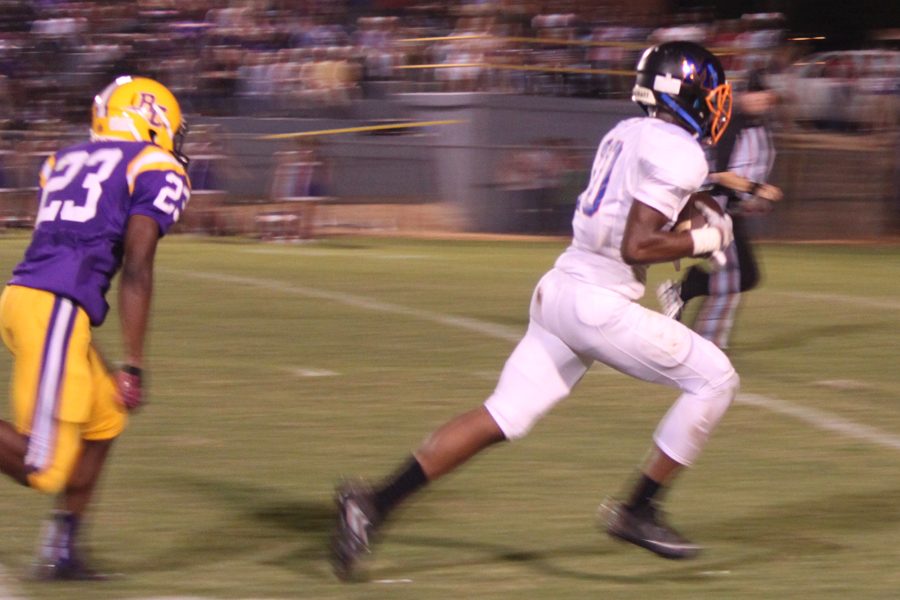 “Our kids fought hard all game and found a way to beat a tough team tonight,” head coach Brandon Wilcox said. “I was proud of the way different aspects of our football team picked the other up. There were times where our offense sputtered and the defense found a way to make a play. Other times our defense would give up a play and our offense would answer back. On good teams you need everyone fighting for a common goal and tonight we did that. It has been a long time since the boys from Montevallo could say they beat Bibb County. Tonight we did just that.”

The Choctaws scored first on handoff for a 70 yard run. They missed the two point conversion leaving the score 0-6. The Bulldogs quickly answered with a 40 yard touchdown of their own by senior Treshawn Brown. Senior Diego Martinez completed the extra point putting the Bulldogs on top 7-6.

Shortly after, senior Zac Oden completed a pass to junior Tavarius Holman for a touchdown, but was later called back due to a penalty. The next play, junior Daqwan Bryant scored on a 66 yard reception from Oden with four minutes left in the second quarter.

With the Dogs on defense, senior Jackson Hughes deflected and intercepted a Choctaw pass to set up a 25 yard field goal for Martinez leaving score 17-6, Bulldogs.

The Choctaws then completed a pass for a 60-yard run but were tackled by Bryant. Failing to score a touchdown, the Choctaws settle with a field goal. They then held the Bulldogs and scored on their next possession leaving the score tied at 20-20.

With Oden at the helm, the Bulldogs run the ball to the 15-yard line putting the boys in scoring position. Oden threw the ball to sophomore Jay Sullens in the endzone to put the Dogs back on top, 27-20. The Choctaws fought back with an 80-yard touchdown run, tying the score back up.

With five minutes left in the game, Holman made a catch from Oden and broke through several tackles to score for the Dogs putting them up 34-27. With 31 seconds left, Martinez finalized the score 37-27 with a field goal.

Bryant led the team with 6 catches for 123 yards and 1 touchdown.

“It was a hard fought game,” Bryant said.  “Our perseverance in the off season really paid off tonight.”

Sophomore Tyler Olds let the Dogs defensively with 13 tackles and 1 fumble recovery.  Hughes had nine tackles and one interception.

“It a a good team win, especially with it being over Bibb County,” Hughes said.  “It’s one of the best games we’ve played defensively so far.”