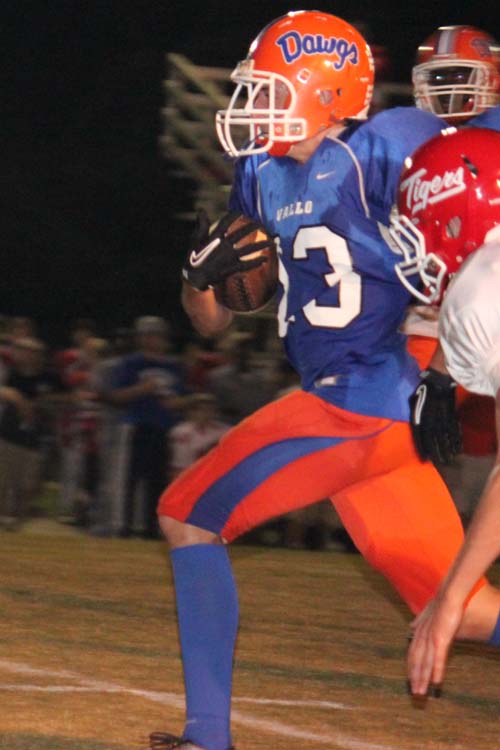 Andrew Zow’s football team suffered a heartbreaking loss to West Blocton Tigers, dropping their season to 1-4.
“We as a team had too many turnovers and when you turn over the ball that much it is almost impossible to win a game,” Zow said.
Both senior Landon Goodwin and junior Quindarius Jackson scored touchdowns for the Bulldogs in the first quarter.  Both field goal attempts were failed by junior Quintezz Stevens.  West Blocton answered   scoring two touchdown of their own, ending the first quarter 13-12, Tigers.
During the second quarter West Blocton held Montevallo to no points scoring 13 of their own, sending the Bulldogs to the locker room with the score 12-26.
“Montevallo looked to be on track and jumped to an early lead, but numerous turnovers and missed assignments led to the two touchdown lead for the Tigers in the second half,” defense coordinator Trey Simpson said.
Despite closing the gap early in the third quarter scoring on their first possession of the half, the Bulldogs could not overtake West Blocton down the stretch losing the game, 18-32.
“Our players made some mental mistakes early in the game, but we continue to strive to get better from week to week,” coach Matt Taylor said.
Jackson led the Dogs in rushing yards for 111 yards on 8 carries.
“I felt like we could have done better as a team,” Jackson said.  “There are a lot of things we need to work on as a team, and I hope we get better as the season comes to an end.”
Goodwin led the team in rushing yards receiving 3 catches for 104 yards and scoring 2 touchdowns for the Bulldogs.
“I think we took them too lightly and we didn’t play to our ability,” Goodwin said.  “It showed in practice that we weren’t ready for the game.”