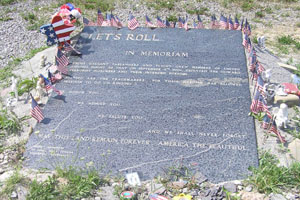 September 11, 2001. Aboard United Airlines flight 93.  Four men devise a heroic plan to take back control of their hijacked aircraft.
When Tom Burnett, Jeremy Glick, Mark Bingham and Todd Beamer boarded that flight, they were four total strangers all on their way to somewhere else. However, when these men, these heroes, learned of their predicament, they immediately knew what had to be done.
After contacting their loved ones, Burnett, Glick, Bingham and Beamer banded together, bonded by fear, adrenaline, and an unshakeable sense of justice. The men rushed the cockpit, fought their adversaries and crashed the plane into the ground near a strip mine in rural Pennsylvania. While each and every one of flight 93’s passengers was killed, the actions of these everyday superheroes saved countless other lives, and spared another of our country’s monuments. These brave men’s names will live on forever.
Now, the question in the back of everyone’s mind who hears of this tale is the same: What would I have done? In a group discussion, it’s easy to bounce this question back and forth, deflecting it toward another person, or dodging the entire question itself. Yet, if you really search yourself, look deep down into your heart and soul, you will reach the same conclusion that I did: you have no idea.
Sure, in the course of the mental debate with yourself, you will reassure yourself that it would be your idea to rush the cockpit; that you would have been the first one in; that you would have manned up and rushed the cabin with reckless abandon.
But stop for a minute, and put yourself in the shoes of one of the men who actually followed through with that courageous act. In the course of a few hours, you have learned that three men, armed with knives and a complete conviction that what they’re doing is right, have hijacked the plane, you have called your loved ones for the last time, and you are about to make the final, most important decision of your life.
What did you do? Did you fight, and take down the plane in a blaze of glory, or did you sit back, paralyzed with fear and indecision, and allow those three men to tear down not only one of our nation’s monuments, but a little more of our nation’s glory and pride?
Now, when the two scenarios are laid out like that, it’s easy to see what the more honorable choice would be. But until we are thrust into a mental warzone, and I pray each and every day to never be put in such a situation, we will never, ever be able to predetermine our actions, or be able to foresee their consequences.