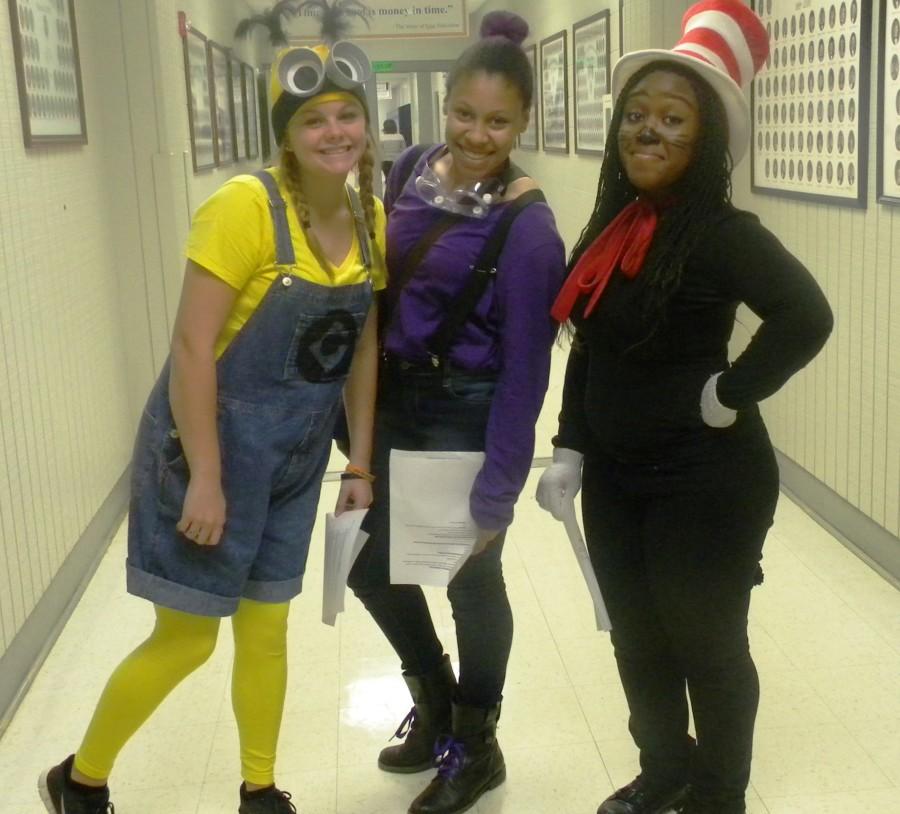 The week of Homecoming is a traditional experience that allows the whole school to come together in unity and spirit. Students of each class look forward to the eventful week with determination to stand out and have more school spirit than the others.
This year’s homecoming was week was packed full of special events and activities. Each day served as a different dress up day. Monday was “Movie Monday,” during which students dressed up as their favorite movie characters. Some characters present were Minions, Dorothy and Forrest Gump.
“My friends and I were ghetto Disney princesses,” senior Isabel Gallo said.  “We called ourselves Weave-a-punzel, Izzyrella, Snow Black and Fairy Ratchet G-ma. It was pretty hilarious.”
For certain dress up days, each class put on a skit for the student body to display their creativity and sense of humor. The skits had to recognize the dress up theme, but always tie in to Montevallo defeating their opponent, Asheville.
The seniors stole the show Monday afternoon with a “Breakfast Club” themed skit, featuring Darla from “Nemo” and Bubba Gump.
Tuesday was “Too Old Tuesday.”  The students had a chance to portray their idea of senior citizens. On this day props were essential in order to stand out. There were oxygen tanks, walkers, canes, IV bags and baby powder in almost every student’s hair.
“My favorite part of homecoming was being able to ride around in a motor scooter for the whole day.” senior Dylan Sanders said.
Tuesday’s skit winner was the junior class.
Wednesday was “Wild Wednesday,” so students dressed up as their favorite animals. That day we saw Big Bird, monkeys and reindeer among the lions, tigers and bears.
The powder-puff game was hosted that afternoon. This was a chance for the girls of every class to compete and show off their football skills. The freshmen and juniors played first, ending with the win for the freshmen. The sophomores and seniors played next, ending with the win for the seniors. The championship game was played by the freshmen and seniors.
“It may have been just a little fun competition, but I think every girl out there was serious,” freshman Lauryn Lilly said.
Although the freshmen fought hard, the senior class took home the win.
“I’m glad we were able to win our last powder-puff game,” senior Katie Hamrick said.  “I’m so proud of these girls. I love my class.”
Thursday, students had an opportunity to show off their school spirit. Each class wore their own class shirts.
Later that day, a volleyball tournament among the classes took place. Boys and girls were both allowed to participate in this competition, and the juniors were the overall winners.
Thursday afternoon was the homecoming parade, during which students showed their school spirit by displaying their floats, wearing their spirit shirts and chanting slogans about their class. Floats exhibited themes such as “Bow down to the Crown” and homemade boxing arenas.
During the community pep rally, the classes participated in spirit competitions, in which the junior class claimed victory.
Friday, the last day of homecoming festivities, was “Freaky Friday,” or tacky day.  Mismatched outfits dominated the day.
Each class also decorated a spirit hall based on their theme.  The seniors chose a Candy Land theme, the juniors had a boxing theme, the sophomores used a “Baddest Bulldog” theme, and the freshmen illustrated a Wizard of Oz theme.
During the half-time show at the homecoming game, senior Cynthia Herrera was crowned 2014 Homecoming Queen.
“It was an honor to be crowned Homecoming Queen by my peers,” Herrera said, “It is a moment that I will forever cherish.”
Diaritze Chavez was crowned junior princess, Lacey Hamrick as sophomore princess and Madison Childress as freshmen princess.
In addition to Herrera, rounding out the homecoming court were senior candidates Lena Buttgereit, Ashley Williams and Hope Dryer. The junior candidates were Destyni Peoples, Chavez and Emma Jones. Sophomore candidates were Emri Hannah, Hamrick and Danielle Douglas. Freshmen candidates were Lauryn Lilly, Childress and Kaelynn Martin.
The homecoming dance took place in the MHS cafeteria that night. Students danced, ate and socialized until midnight.
Despite all the competitions, students showed pride in their own class and in the school