Cabrera selected Teacher of the Year 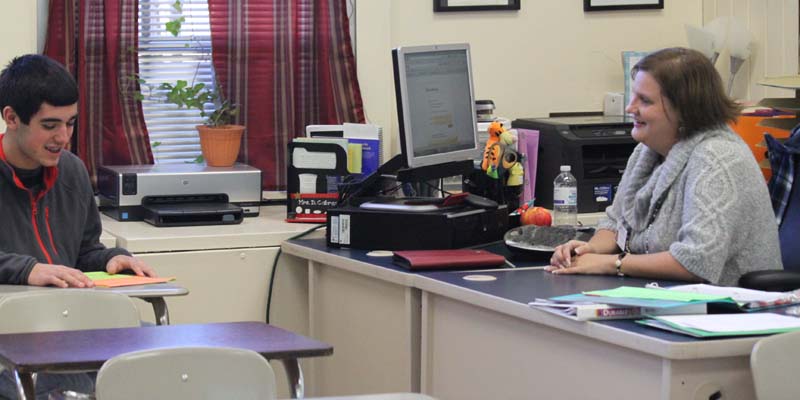 The 2012-2013 MHS Teacher of the Year is math teacher Dawn Cabrera.
Cabrera has been teaching for 18 years total. Previous teaching assignments include Jess Lanier High School, Davis Middle School, the Birmingham alternative school, and eight years here at Montevallo High School. She also teaches online math classes for the University of Alabama and night classes at Jefferson State Community College.
“I knew I was going to be a teacher from birth,” Cabrera said.  “I didn’t have anyone in my family that influenced my decision, but I have recently found out through a study of my ancestry that I came from a long line of educators.”
Cabrera enjoys seeing the light bulb shine as students make connections and understand the lesson.  Her philosophy is everyone can learn if they choose to try.
“I am honored that my peers thought so highly of me to choose me, but I just represent all the hard-working teachers who love their students,” Cabrera said.
Cabrera was born in Cleveland, Ohio, but grew up in the middle of Tennessee, where she went to Lavergne High School.  Cabrera did not play any sports, but was involved in many clubs and organizations including Spanish club, art club, spirit club, Mu alpha Theta, future teachers, National Honor Society, drama. She was even chosen most likely to succeed in her class.
Cabrera went to college at Middle Tennessee State University for her bachelor’s degree and the University of Alabama at Birmingham for her master’s degree.  Cabrera received three master’s degrees in mathematics, computer science, and secondary education in 1993, and then a master’s in math education in 2003.
“I worked at Hardee’s to put myself through college,” Cabrera said.  “I didn’t receive any scholarship money and I didn’t have any help from my parents, so I worked 50-60 hours a week and the day I graduated I was debt free.”
Cabrera loves working with parents in activities outside of the school.  This strengthens the relationship inside the classroom.  Cabrera believes that the single most important characteristic a teacher should have is love for this profession.
“I love it when my students participate by asking questions and sharing their own thoughts,” Cabrera said.  “This allows other students and me to consider things in different perspectives.”
Cabrera is married to Sam Cabrera.  He has retired with 43 years in the Army as a Command Sergeant Major.
Cabrera has two adopted girls. Sela, who is 20, is currently studying at Wallace State, and Cassie, who is 19, is studying nursing at Troy University and will be commissioning in the Army next fall.
A role model Cabrera mentioned who influenced her is her husband.
“My husband dropped out of school when he was 12 to take care of his family,” Cabrera said.  “He received his education in the Army and retired at the highest rank as an enlisted soldier.”