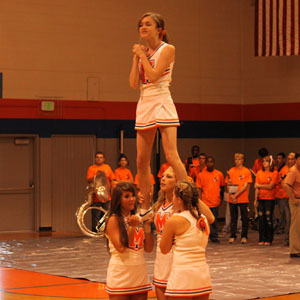 The cheerleading squad worked diligently to prepare for this season.
The team practiced everyday during eighth period and stayed after school several days a week practicing for performances, such as pep rallies and Friday night football.
“I practice very hard to help make my squad look good,” senior Kentessia Simpson said.
This year the varsity cheerleading squad has a new coach, Jordan Pritchett.
“With a new coach this year there are different rules, but it is all working out for the best,” junior Amanda Draper said.
The squad also spent a lot of time making signs to support the football players as well as creating the bust through banner for games.  In addition to practices, the cheerleading squad participated in several on-going fundraisers, such as selling football programs and working the concession stand during youth football games.
“I was a cheerleader at MHS, so it is very special to now be the coach. I am very proud of the hard work that the girls put in to the squad and enjoy working with each of them,” coach Jordan Pritchett said.
Wednesday, Aug. 31, the cheerleaders led a clinic for kindergarten through fifth grade students.  These girls had the opportunity to cheer with the varsity squad during the homecoming pep rally on September 8.
For some this will be their last year as an MHS cheerleader.
“I will miss cheerleading when I graduate,” senior Brittany M. Smith said.
The 2011-2012 varsity cheerleading squad consist of the following students: seniors Kentessia Simpson and Smith; juniors Alyssa Dennis, Amanda Draper and Jamesia Blue; sophomores Emily Colley and Alli Burr; and freshmen Kelsie Sanders, Jill Brantley, Kayla Smith, Olivia Lowery and Myranda Willis.